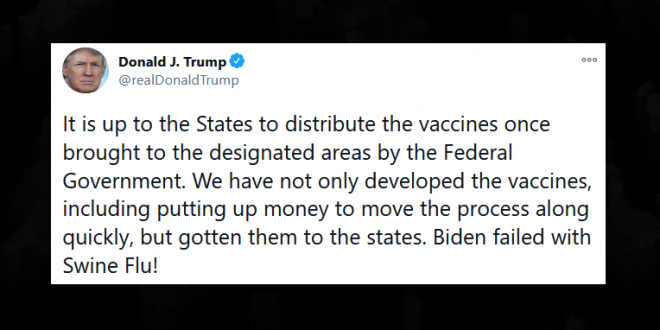 President Donald Trump lashed out at President-elect Joe Biden after Biden raised concerns that COVID-19 vaccines weren’t being given to Americans fast enough. Trump, who throughout the pandemic has pushed responsibilites off to the states to spare his administration any blame, pointed a finger at them again.

On Tuesday afternoon, Biden said at Wilmington’s Queen theater that the vaccine roll-out was ‘falling behind’ and at the current pace vaccinating most of the U.S. population could take ‘years.’

It is up to the States to distribute the vaccines once brought to the designated areas by the Federal Government. We have not only developed the vaccines, including putting up money to move the process along quickly, but gotten them to the states. Biden failed with Swine Flu!