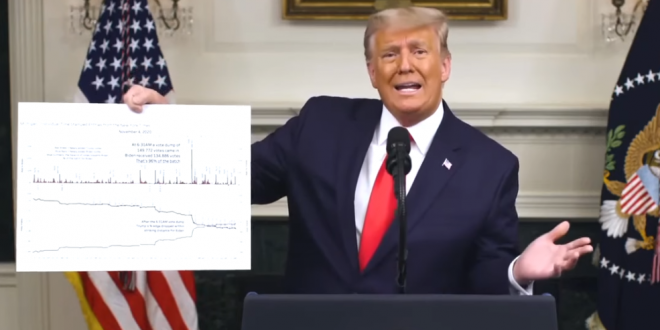 President Donald Trump on Wednesday released a lie-packed video on Facebook falsely claiming there was massive “fraud” in last month’s election, which he lost by 7 million votes to Democrat Joe Biden.

The 46-minute, 8-second video, shot in the White House, recycled a host of debunked claims that together paint a global conspiracy designed to make him lose his reelection bid.

“My opponent was told to stay away from the election. Don’t campaign. We don’t need you. We’ve got it. This election is done,” Trump said to the camera. “In fact, they were acting like they already knew what the outcome was going to be. They had it covered and perhaps they did, very sadly for our country. It was all very, very strange.”

Writing that his remarks “may be the most important speech I’ve ever made,” the president once again refused to concede defeat and instead repeated a long series of false assertions about voter fraud, accusing Democrats of a conspiracy to steal the presidency.

The video, which a White House official said was recorded last week, was the in-person embodiment of Mr. Trump’s staccato tweets during the past three weeks: one falsehood after another about voting irregularities in swing states, Democratic conspiracies, attacks on state officials and signature verifications.

Trump still thinks counting all the votes (including mail ballots he discouraged his supporters from casting) is somehow evidence the election was rigged. He even has a chart of when they were counted! pic.twitter.com/L8O8KPEhWK

Just watched the full 46 minute video Trump posted. Basically no difference between what he’s saying and what Sidney Powell is saying except Trump’s not name-dropping Hugo Chavez

Really leaning into being the sorest loser in American political history — the full video is 46 minutes long and chock full of lie after lie after lie https://t.co/WpJWtKfKl9

Previous 85% Of Trump Voters: Biden Didn’t Win “Legitimately”
Next Obama: I May Get Vax On TV To Build US Confidence