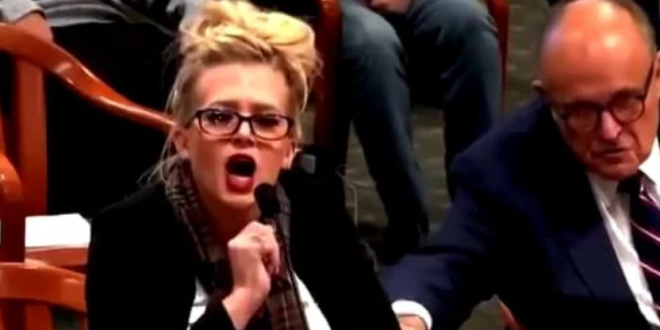 Two years before she’d become the breakout star of the clown show Rudy Giuliani brought to Lansing this week, Mellissa Carone was sending her then-boyfriend’s ex-wife graphic videos of the two of them having sex.

Police reports obtained by Deadline Detroit reveal obscenity and computer crime charges filed against the 33-year-old Grosse Pointe Woods mother stem from a harassment campaign she waged against a 42-year-old woman in 2018 and 2019.

Carone served a one-year probation sentence. It ended shortly before she was contracted by Dominion Voting Systems to perform IT work at Detroit’s TCF Center during the November election, where she’s baselessly claimed she witnessed rampant fraud.

Now Carone is telling a much different story, despite what she reportedly told police. Carone admitted in a phone interview that she initially told police she believed her fiance’s ex-wife unlawfully obtained the videos.

Nevertheless, Carone insisted that Americans should still believe she told the truth about voter fraud in Detroit. “I’m 100% credible,” Carone said. “I’ve already talked to Trump and Giuliani about this.”