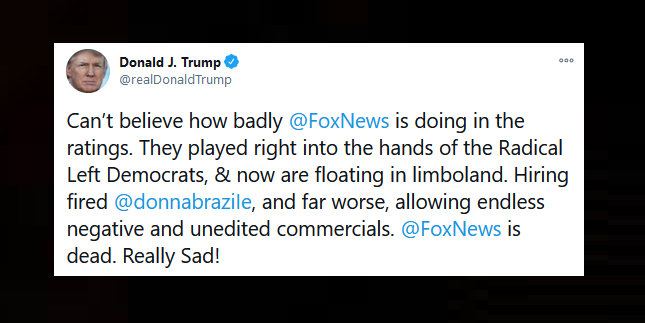 Trump: “Fox Is Dead” From Not Loving Me Enough

President Donald Trump is going in for the kill shot against his one-time favorite network. In a Wednesday morning tweet, the president bashed Fox News — going so far as to pronounce its demise.

The tweet is the latest example of Trump trying to siphon away viewers from Fox, and push them towards fringe, far-right outlets such as OAN and Newsmax.

Yet for all his proclamations of Fox’s demise, the president has — since the election — granted interviews only to that network.

Can’t believe how badly @FoxNews is doing in the ratings. They played right into the hands of the Radical Left Democrats, & now are floating in limboland. Hiring fired @donnabraziIe, and far worse, allowing endless negative and unedited commercials. @FoxNews is dead. Really Sad!