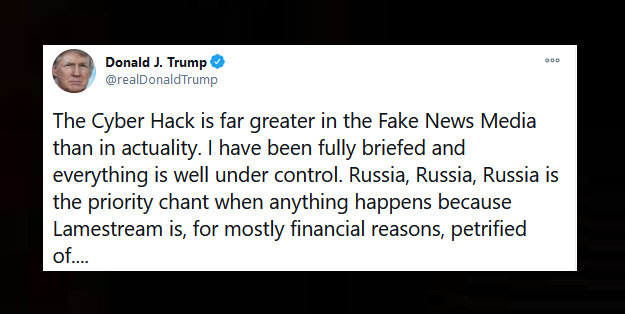 President Donald Trump commented for the first time on Saturday on the hacking campaign that has torn through U.S. government and businesses that many experts believe is the work of Russian intelligence and downplayed the security breach as well as attempted to deflect blame away from Russia.

Trump’s comments contradict what members of his own government have said about the hack and it is the latest example of his unwillingness to criticize Russia, which U.S. intelligence agencies have said interfered in the 2016 election to help Trump.

The Cyber Hack is far greater in the Fake News Media than in actuality. I have been fully briefed and everything is well under control. Russia, Russia, Russia is the priority chant when anything happens because Lamestream is, for mostly financial reasons, petrified of….

….discussing the possibility that it may be China (it may!). There could also have been a hit on our ridiculous voting machines during the election, which is now obvious that I won big, making it an even more corrupted embarrassment for the USA. @DNI_Ratcliffe @SecPompeo