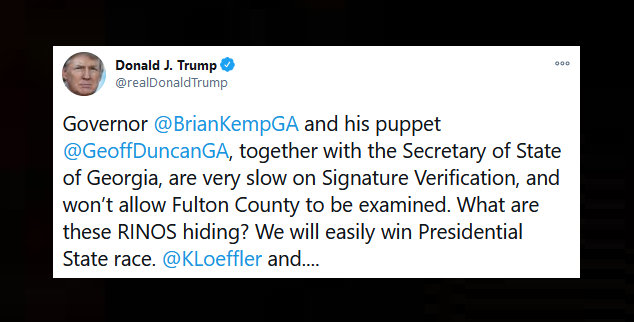 President Trump on Monday derided Georgia’s GOP leadership as turncoat “Republicans in name only” even as the party scrambles to stay unified for the crucial upcoming U.S. Senate run-off elections.

Spewing unfounded claims about his loss in the state, Trump trashed Gov. Brian Kemp and top GOP lieutenants for failing to back his dead-end effort to overturn the results of the presidential vote in the Peach State.

Governor @BrianKempGA and his puppet @GeoffDuncanGA, together with the Secretary of State of Georgia, are very slow on Signature Verification, and won’t allow Fulton County to be examined. What are these RINOS hiding? We will easily win Presidential State race. @KLoeffler and….

….@sendavidperdue will not be able to win on January 5th. unless these people allow Signature Verification in presidential race. K & D need it for their race also, & Georgia spirit will rise to such a high that they will easily bring home a great victory. Move fast @BrianKempGA