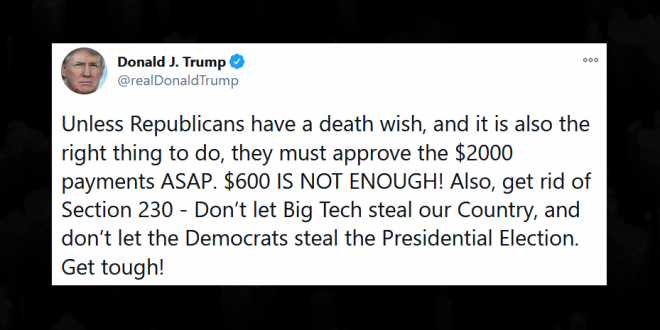 Senate Majority Leader Mitch McConnell (R-Ky.) on Tuesday blocked Minority Leader Chuck Schumer’s (D-N.Y.) request to hold a vote on a House standalone measure that would boost the size of stimulus checks from $600 to $2,000 per person.

President Trump has demanded that the payments be increased, creating a rift between him and Senate GOP leadership ahead of a crucial runoff election in Georgia that will determine control of the chamber.

McConnell did not explain why he objected to Schumer’s request to fast-track the bill, but noted that President Trump has demanded Congress act on repealing liability protections for tech companies and election-related reforms, in addition to the stimulus checks.

Unless Republicans have a death wish, and it is also the right thing to do, they must approve the $2000 payments ASAP. $600 IS NOT ENOUGH! Also, get rid of Section 230 – Don’t let Big Tech steal our Country, and don’t let the Democrats steal the Presidential Election. Get tough! https://t.co/GMotstu7OI

Previous LA Residents Will Get Vax Record To Store In iPhones
Next Louie Gohmert Admits Election Challenges Might Bring Violence: “There’s Going To Be Trouble No Matter What”