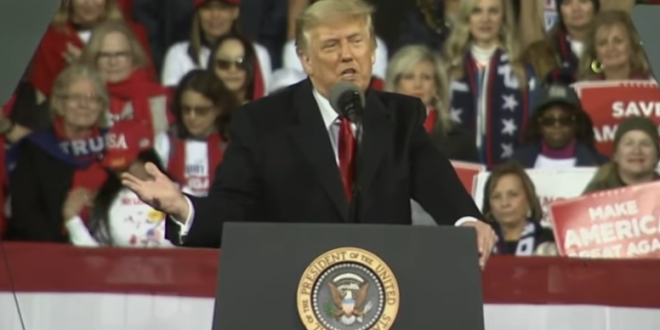 Taking the stage for his first rally as a lame duck president, Mr. Trump immediately, and falsely, claimed victory in the presidential race. “You know we won Georgia, just so you understand,” he said.

“They cheated and rigged our presidential election, but we’ll still win,” Mr. Trump said, offering no evidence but nonetheless prompting about 10,000 supporters gathered on the tarmac at a regional airport to chant, “Stop the Steal!”

Mr. Trump amplified the critique he had been making of Mr. Kemp much of the day on Twitter, all but demanding that the governor overturn the will of the voters for him. “Your governor could stop it very easily if he knew what the hell he was doing,” the president said. “Stop it very easily.”

The Georgia rally came hours after Trump reportedly phoned Georgia Gov. Brian Kemp (R) and asked him to convene a special session of the legislature to overturn the election results.

Kemp reportedly turned Trump down, and perhaps as a result, Trump attacked him a number of times throughout his speech, at one point telling his fans, “Your governor should be ashamed of himself.”

Then, toward the end of the rally, Trump outlined the desperate two-front battle he’s trying to fight to overturn the election, saying “hopefully our legislatures and the United States Supreme Court will step forward and save our country.”

Republicans had been concerned that Trump could depress voter turnout among his base in the state’s crucial runoffs if he continued to rail against Georgia’s election system and attack Kemp — exactly what Trump’s done at the rally.

The President also ran through a litany of issues that he envisions with a Democrat-controlled Senate, including packing the Supreme Court, ending the filibuster, abolishing second amendment rights, and making Washington, DC, and other places, states to secure more Democratic votes in Congress.

Trump said that winning the two Senate seats in Georgia is the “last line of defense to save America,” a tacit acknowledgment that he lost the presidential election.

Trump is now just standing around as his followers boo at right-wing media clips being played on a big screen for them that are meant to cast doubt on his loss to Biden (Loeffler and Perdue have been forgotten) pic.twitter.com/Z0c1i97kWl

“Your governor should be ashamed of himself,” Trump says in Georgia about Brian Kemp, to cheers pic.twitter.com/F8BbI9375Z

“We will find that hundreds of thousands of ballots were illegally cast all over your state, and all over the country by the way. More than enough to give us a total historic victory.” — Trump pic.twitter.com/nuXtoOufxs

“Hopefully our legislatures and the United States Supreme Court will step forward and save our country” — Trump pic.twitter.com/CbGHlbO9it

Trump has repeated his lie about winning Georgia so many times during this rally that he’s now mentioning it in passing like it’s a settled truth pic.twitter.com/Ql4Rm2ipFk

Have you heard the My Pillow guy?

Check out the chyron. Beyond parody. pic.twitter.com/gg3JrUNQcY

Trump points to 2024 run for the White House at his first campaign event since he lost the presidential election last month: “In 2024, and hopefully I won’t have to be a candidate, we’re going to win back the White House again.” https://t.co/gtrzo6azOZ pic.twitter.com/HFI62dy2fQ

“Santa Q” is here greeting people on line to the busses.

Fox News journalists are getting the most abuse from the crowd lining up for Trump’s rally in Valdosta, Georgia. Cries of “we trusted you” and “traitors”. pic.twitter.com/Av1uHvrXdQ

Sen. Perdue immediately gets drowned out by people chanting “Fight For Trump!” and hands the mic back to him after 30 seconds of speaking

So to review, Trump channeled a white supremacist conspiracy about “white genocide” and confiscation of white farms by claiming Democrats will give white people’s farms to black people. https://t.co/zyU6Yz66lG

The outgoing president (who seldom goes to church) suggests that the incoming president (who goes regularly) is anti-Christmas & will “be trying to take that word out of our vocabulary.” pic.twitter.com/VO9JUiSS4R

Trump, who golfs at his private clubs constantly, whines that he’s never able to take a vacation pic.twitter.com/K8Bz456XQW

Siri show me people who aren’t tired of losing pic.twitter.com/bk3x6JcVcQ