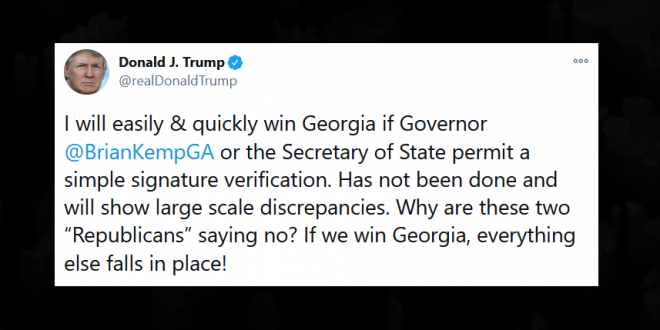 Donald Trump will return to the campaign trail on Saturday – not, notionally at least, in his quixotic and doomed attempt to deny defeat by Joe Biden, but in support of two Republicans who face January run-offs which will decide control of the US Senate.

The president and first lady Melania Trump were due to appear at a regional airport in Valdosta, a city in Lowndes county in southern Georgia, a staunchly Republican region. Although Trump was not scheduled to speak until 7pm, organisers promised a packed event schedule, with the first speaker due two hours earlier.

Republican governor Brian Kemp, who was strongly backed by Trump in his run for office in 2018, was not on the list of speakers. The governor has drawn Trump’s ire after certifying the results of a state contest President-elect Biden won by more than 10,000 votes.

I will easily & quickly win Georgia if Governor @BrianKempGA or the Secretary of State permit a simple signature verification. Has not been done and will show large scale discrepancies. Why are these two “Republicans” saying no? If we win Georgia, everything else falls in place!