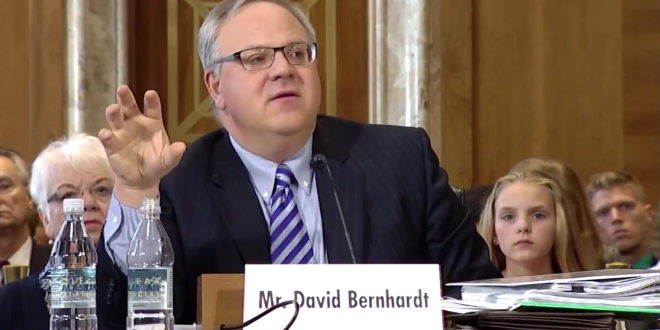 Burning it all down on the way out:

The latest rule narrows the definition of habitat to areas that can currently support a species, a move environmentalists say ignores the changing climate or efforts that could be made to modify a landscape.

Numerous studies have found the globe is in the midst of an extinction crisis, with species dwindling as their habitat shrinks due to logging, agriculture, human expansion and climate change.

Before joining the Trump administration, Interior Sec. David Bernhardt was a lobbyist for Haliburton, Cobalt Energy, the Independent Petroleum Association, and similarly dastardly outfits. In June, Bernhardt unveiled a plan to allow drilling off Florida’s Gulf coast, but only after the November election. He last appeared on JMG when he rushed through arctic drilling leases ahead of the Biden takeover.

To be clear: The Trump admin released a rule today that significantly rolls back protections for critical habitat per the Endangered Species Act.

They’re too busy gutting laws to protect vulnerable species in the middle of a climate & extinction crisis.https://t.co/lT90WpxOLO

BREAKING: The monarch butterfly will have to wait to receive protection under the Endangered Species Act. The U.S. Fish and Wildlife Service says the butterfly’s population has fallen enough to qualify, but there are other species in line ahead of it. https://t.co/6zH8iWcLIZ

Previous GOP Rep. Mo Brooks: I Just Need One Senator To Join Me And Force A Floor Vote On Rejecting The Election
Next Coalition Of Christian Hate Groups And Cultists Call On State Legislatures To Declare Trump As “Lawful Winner”