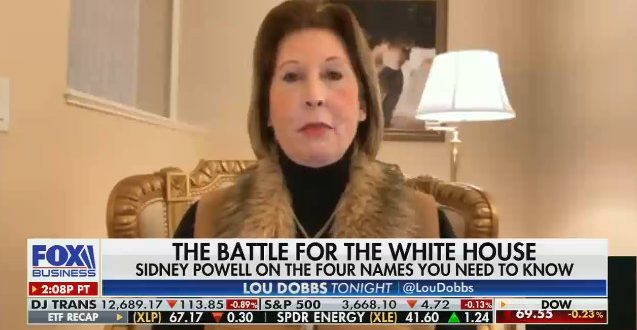 The Kraken: This Election Was A “Cyber Pearl Harbor”

“We are still reviewing the massive amount of documents that we have, but we have communications between them and all different kinds of messages that indicate their involvement in it.

“It’s a massive amount of additional information to go through that’s only been in our hands a short time, but we will be producing more and more of it. It will be coming out more by the day.

“And then also the connections with the Chinese and other countries that were attacking us in this massive cyber Pearl Harbor, as we called it.” – Sydney Kraken Powell, speaking to Lou Dobbs.

Previous Mike Pence: Loeffler and Perdue May Be Our Last Line Of Defense To “Preserve Our God-Given Liberties”
Next GOP State Rep Begs Jesus For “Miracle” After Defying Mask Protocols And Dismissing Severity Of Pandemic