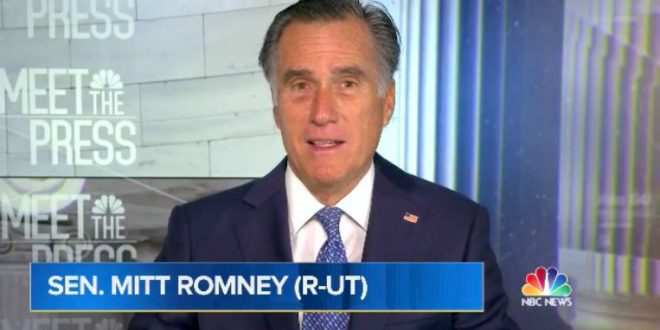 “I was disappointed with the president’s comment. But I think we’ve come to recognize that the president has a blind spot when it comes to Russia.

“And the reality here is that the experts, the people who really understand how our systems work and how computers work and software and so forth, the thousands upon thousands at the CIA and the NSA and the Department of Defense, have determined that this came from Russia.

“This is an extraordinarily damaging invasion, and it went on for a long, long time.” – Sen. Mitt Romney, today on Meet The Press.

Sen. Romney blasts Russia for cyberattack he says amounts to an “invasion,” adding that the president’s unwillingness to blame Russia shows he has a “blind spot” when it comes to the country. https://t.co/Zhpg3mcwsv – @MeetThePress

President Trump has “a blind spot when it comes to Russia and so you can expect that, that’s the response that he would have,” GOP Sen. Mitt Romney says on Pres. Trump downplaying the suspected Russian cyberattack.

“Russia is a gas station parading as a country” — Mitt Romney pic.twitter.com/5xFgVQmuJB

Sen. Mitt Romney: “[Trump] is leaving Washington with a whole series of conspiracy theories and things that are so nutty and loopy that people are shaking their head.” pic.twitter.com/CR90LPdYQn

Sen. Mitt Romney: “As I look at the 2024 contenders, most of them are trying to become as much like Donald Trump as they can be…”pic.twitter.com/rGVDsqWEcJ

Previous MS Gov Announces Day Of Prayer Against COVID
Next Axios: Trump Won’t Announce 2024 Bid Before Biden’s Inauguration Because Cultists Would Think He Gave Up