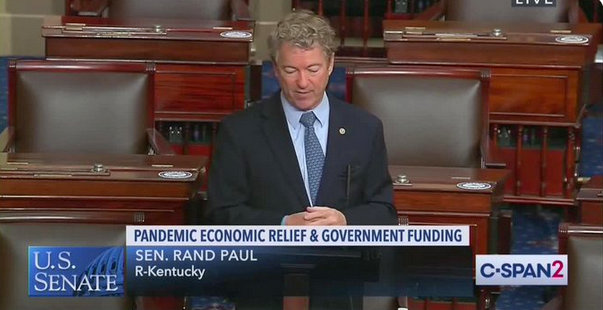 Casting himself in the role of Christmas Grinch, U.S. Sen. Rand Paul is chastising Democrats and Republicans alike who support a roughly $900 billion coronavirus relief package that officials argue is sorely needed to help the staggering economy.

Paul is opposing the new relief package and deriding Congress for handing out “free money” as the federal government’s national debt keeps climbing.

“This bill is free money for everyone,” he said in a speech on the Senate floor Monday afternoon. “And yet, if free money were the answer, if money really grew on trees, why not give more free money? Why not give it out all the time?

My guess Big Spenders in Both Parties will pass this without anybody ever really reading it.

Today, bathroom rug head Rand Paul attacked Congresswoman @AOC for getting a vaccine, but didn’t attack his male colleagues for doing the same, then he said no one deserves relief money even though he voted for a $1.5 Trillion GOP Tax scam. I really hate this racist fucker.

This is one of the best speeches I’ve ever heard from the Senate floor. @RandPaul hits the nail right on the head when it comes to this new stimulus bill.

I encourage you to watch every second of this: https://t.co/mfmUxHbzWu

Previous Trump Order: New Federal Buildings Must Be Beautiful
Next Mat Staver: The Election Was Stolen, Send Me Money