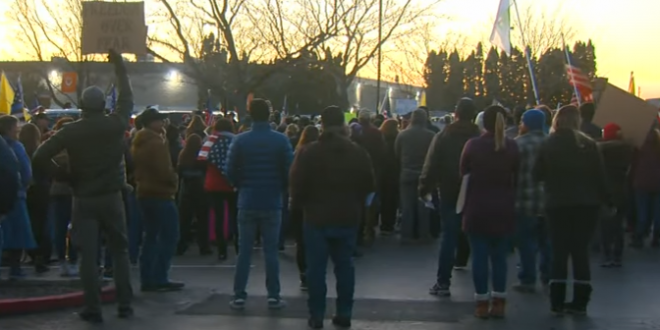 Moments after a tearful Commissioner Diana Lachiondo left the virtual meeting to head to her house — where her son was home alone, and where anti-mask, anti-health-order protesters had reportedly gathered — CDH Director Russ Duke interrupted a doctor’s statements on the toll of the coronavirus to tell the board and people watching that Boise Mayor Lauren McLean and Boise Police Chief Ryan Lee had requested that the meeting be ended for safety reasons.

Dr. Ted Epperly, another board member, said protesters gathered at his house as well. He told the Statesman that about 15 people were outside his home, “beating garbage cans and flashing strobe lights through my windows. Two came up and knocked on my door during the meeting.”

The anti-maskers gathered outside the public health building in downtown Boise and at commissioners’ houses around the city, according to a press release from Boise police.

The cops planned for a protest at the health building, but still believed “officers would not be able to maintain public order,” the press release said. Along with Boise Mayor Lauren McLean, they asked the commissioners to postpone the meeting.

The commissioners represent Ada, Boise, Elmore and Valley counties. Ada is the most populous county in the state, with one-fourth Idaho’s population.

Hey Tucker, shouldn’t this concern you? I remember what a fuss you made when protestors were outside your home https://t.co/Z8Ov5VPs7Q