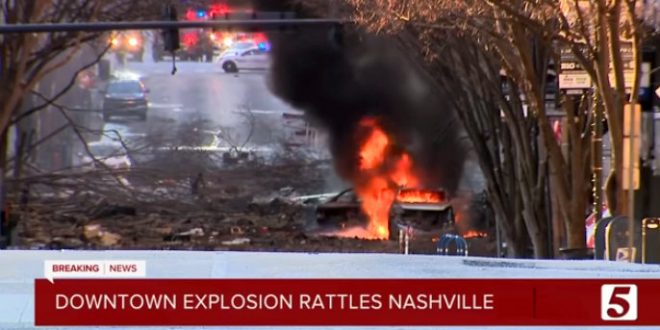 The explosion happened in the area of Second Avenue and Broadway near Commerce Street occurred around 6:30 am Friday. Heavy black smoke could be seen rising above the affected area.

Officers with the Metro Nashville Police Department were responding to a call of shots fired Friday morning when they came upon an RV parked in front of an AT&T building at 166 2nd Avenue North, according to police spokesman Don Aaron.

Police saw no immediate evidence of shots fired, Aaron said in a news conference, but something about the RV prompted the officers to request the department’s hazardous devices unit.

The bomb squad was responding to the downtown area when the RV exploded. Three people were transported to hospitals from the scene, but none were in critical condition, according to Nashville Fire spokesman Joseph Pleasant.

The FBI will be taking the lead in the investigation, said spokesman Joel Siskovic. Federal investigators from the Bureau of Alcohol, Tobacco, Firearms and Explosives were also on the scene. The FBI is the primary law enforcement agency responsible for investigating federal crimes, such as explosives violations and acts of terrorism.

At noon, police dogs continued to search cars and buildings in the nearby area. Black smoke and flames were seen early Friday billowing from the area, which is packed with bars, restaurants and other retail establishments and is known as the heart of downtown Nashville’s tourist scene.

Footage from the scene on 2nd Ave North, Nashville,Tennessee,#US, as multiple agencies continue to work and investigate an explosion from earlier this morning. pic.twitter.com/4jDRehktjA

JUST IN: An “explosion linked to a vehicle” occurred at 6:30 a.m. in Nashville on Friday morning, police say.

Police say they believe the explosion was an “intentional act.”

Video of the explosion in Nashville, along with a countdown / warning to evacuate the area. It’s unclear if the evacuation warning was coming from the vehicle with the bomb in it or somewhere else. https://t.co/vcHAMayQYG

Scary video out of Nashville, where a huge car bomb appears to have exploded. pic.twitter.com/HyTGUUJ04z