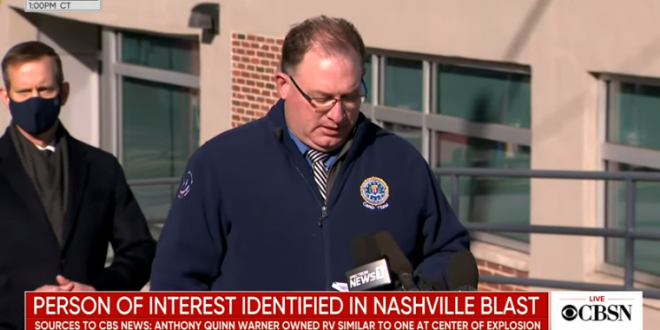 A law enforcement source told CBS News at least one person of interest has been identified in connection to the recreational vehicle that exploded on Christmas morning, rocking downtown Nashville.

Multiple sources confirm that Anthony Quinn Warner, a Nashville area resident, had a similar make and model RV as the one in photos released to the public.

Warner was described as a 63-year-old White man. Federal agents are at the address listed to Warner. FBI Special Agent in Charge Doug Korneski said Saturday there is no indication of additional explosive threats.

BREAKING: @jeffpeguescbs reports for CBS News: Anthony Quinn Warner, 63, is the person of interest in the Nashville Christmas Day explosion. At least 2 tips were called in to @FBI about Warner, prior to the explosion. Quinn is a Nashville area resident https://t.co/FCZdy13a6b