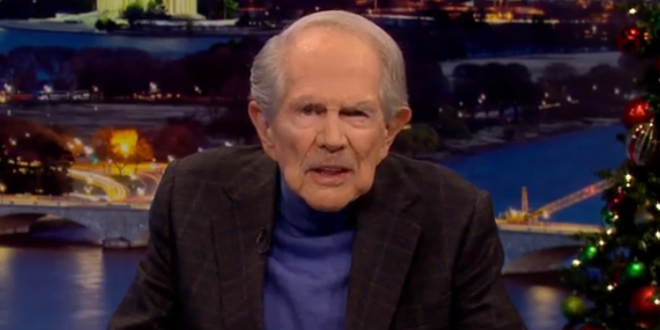 After conceding that Biden will take office and predicting he will either die or resign before too long, Robertson said “it would be a mistake” for Trump to run again in 2024. “My money would be on Nikki Haley,” he added. “I think she’d make a tremendous candidate for the Republican Party.” Robertson then offered a sober assessment of Trump.

“You know, with all his talent and the ability to be able to raise money and grow large crowds, the president still lives in an alternate reality,” Robertson said. “He really does. People say, ‘Well, he lies about this, that, and the other.’ But no, he isn’t lying; to him, that’s the truth.”

Speaking of alternate realities, you may recall that just two weeks ago Robertson predicted that “God will intervene and stop the fraud and theft that has been perpetrated on Americans.” The clip below has 3.2 million views since yesterday.

Televangelist Pat Robertson declares that Biden will be president and that Trump “lives in an alternate reality,” “is very erratic,” and should not run again in 2024: “You’ve had your day and it’s time to move on.” pic.twitter.com/2WYCZOSNTO

Previous Thune: Challenge Will “Go Down Like A Shot Dog”
Next Gingrich: Why I Won’t Recognize Biden As President