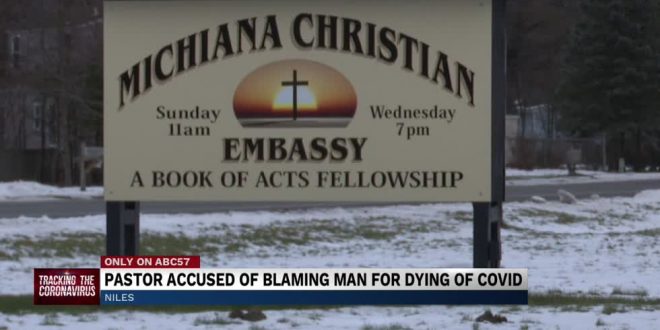 A family is outraged over a video of a Niles pastor seemingly blaming their family member’s – and one of his parishioners – COVID-19 death on a lack of faith. Michiana Christian Embassy previously held a funeral service for Les Tom, but now, Lead Pastor Rev. Jeffrey Whittaker’s Dec. 13 sermon is adding to the family’s heartache.

Whittaker spoke about his faith throughout the pandemic during the sermon. “This is the stuff of where we are living right now, did God know COVID 19 was coming? No, no, it caught him by complete surprise,” said Rev. Whittaker.

“We do not disrespect Les; he died of COVID because he’s weak, because he has no faith,” said Whittaker during the Dec. 13 service. Whittaker declined to speak with ABC57 on-camera but said the comment was taken out of context and the short clip does not paint the whole picture of his two hour sermon.

Read the full article. As you’ll see in the clip below, the pastor also mocks funeral attendees for taking basic COVID precautions and claims that relatively few people have really died. “Our country is being led by the nose into absolute slavery.”