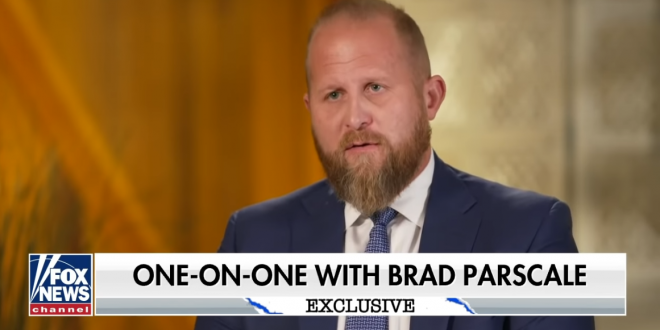 Parscale Blames Trump’s Loss On Lack Of Empathy For COVID Victims, Says Trump No Longer Speaks To Him

Brad Parscale, the former Trump campaign manager who was demoted in July, claimed in a Fox News interview on Tuesday night that President Trump would have handily won the election if he had expressed more empathy about the coronavirus pandemic.

“We lost suburban families,” Mr. Parscale said. “I think that goes to one thing: the decision on Covid to go for opening the economy versus public empathy.” He added, “I think if he had been publicly empathetic, he would have won.”

Mr. Parscale also appeared to blame those who succeeded him in running Mr. Trump’s campaign for failing to file lawsuits before Election Day. In fact, the campaign filed multiple lawsuits during the early voting period seeking to block mail-in ballot rule changes.

Parscale became emotional at a later portion in the interview when MacCallum asked whether he had been in touch with the president following the incident [with his wife].

“I have not,” Parscale replied, “and is pretty hurtful, but it’s probably just as much my fault as it is his. I love that family. And I gave every inch of my life to him,” he said. “Every inch.”

When asked to convey a final message to his former boss, Parscale encouraged the president to “keep fighting” his legal battles challenging the 2020 election results.

“You said ‘We had a plan, me, the president, Jared and it was diverged from at the end,’” MacCallum reiterated. “You left finally first in the summer and then in September.”

“I was removed,” Parscale interjected, as MacCallum quickly followed up to ask how he felt about it. “I was hurt. That was an obvious sign that I was hurt,” Parscalle acknowledged, before vaguely laying the blame for his removal at an unnamed “they” in the campaign.