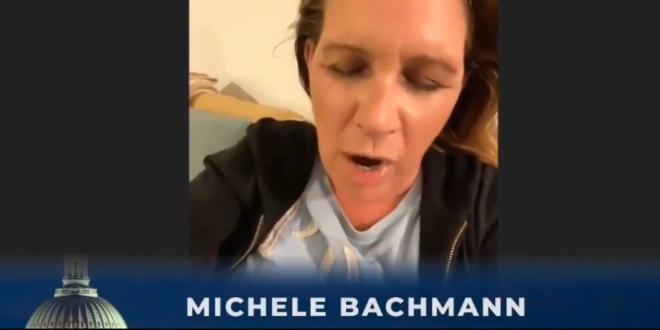 “For this moment in the United States, we seriously, sincerely cry out to you, confessing out personal sins. We confess the sins of our country, as proxies.

“We ask you, oh God, for deliverance that our country may continue to know freedom. Lord, would you deliver these races in Georgia, oh father?

“Would you deliver various local and state races, father, that they aren’t stolen? Would you give us a true vote?

“And oh God, I personally ask from myself, Michele Bachmann, lord, would you allow Donald Trump to have a second term as president of the United States? – Former GOP presidential candidate and House Rep. Michele Bachmann.

In recent months Bachmann has declared that COVID is God’s punishment for Trump’s Middle East plan and that Muslim immigrants have “ruined” her home state of Minnesota. Last month she asked God to use his “iron rod” to “smash the delusion” that Biden was elected president.

Former congresswoman Michele Bachmann has a personal request for God: “Lord, would you allow Donald Trump to have a second term as president of the United States.” pic.twitter.com/i7MafqysDU