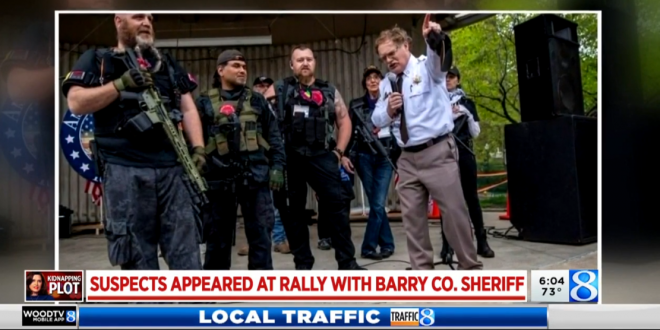 A Michigan sheriff who suggested the men accused of plotting to kidnap Gov. Gretchen Whitmer may have been attempting a citizen’s arrest has filed a federal lawsuit alleging voter fraud and seeking to preserve records related to the Nov. 3 election.

Barry County Sheriff Dar Leaf alleges in the lawsuit filed Sunday, without providing evidence, that “multifaceted schemes and artifices … resulted in the unlawful counting, or manufacturing, of hundreds of thousands of illegal, ineligible, duplicate or purely fictitious ballots in the state of Michigan.”

The day after 13 men were charged Oct. 8 in connection with a plot to kidnap Whitmer and other unlawful activities, Leaf gave an interview to Battle Creek television station Fox 17 News. Many viewed his comments in that interview as a defense of the men charged in the plot.

Read the full article. As I reported at the time, Leaf appeared on stage, in uniform, with some of the men now charged in the terror plot against Whitmer.