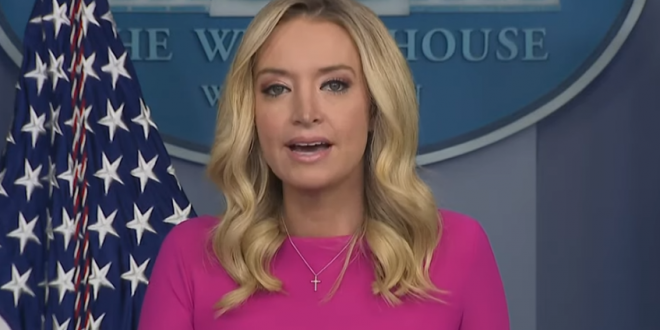 Chris Johnson, a White House reporter for the Washington Blade — the oldest LGBTQ+ newspaper in the United States — confronted McEnany about Trump’s World AIDS Day speech, noting that the president failed to mention the LGBTQ+ community.

“The president honored World AIDS Day yesterday in a way that no president has before, with the red ribbon there,” McEnany answered Johnson, both ignoring his question and lying to the reporters.

Former president Barack Obama honored the day the exact same way in 2012 — by putting up a large red ribbon in front of the White House. Trump, therefore, is not a trailblazer when it comes to World AIDS Day.

This was the fourth consecutive year that Trump omitted LGBTQ people in his listing of communities impacted by HIV/AIDS.

Erasing #LGBTQ people from the discussion of #HIV/#AIDS on #WorldAIDSDay is DISGUSTING & harkens back to a day when the federal gov let countless members of our community die from the AIDS pandemic. It shouldn’t be a surprise coming from an admin that’s let 250k+ die of COVID-19. https://t.co/i3gwLpcfVV

Huh. @PressSec said the “president honored World Aids Day yesterday in a way no president has before with the red ribbon there [on the WH].” And yet….that’s clearly been done before. Here’s 2012. pic.twitter.com/LvN90u3F6D

Kayleigh McEnany: “The president honored World Aids Day yesterday in a way that no president has before with the red ribbon there.”

In fact, Presidents @BarackObama and George W. Bush did honor World Aids Day with a red ribbon at the White House. pic.twitter.com/LXR0aOKq7E