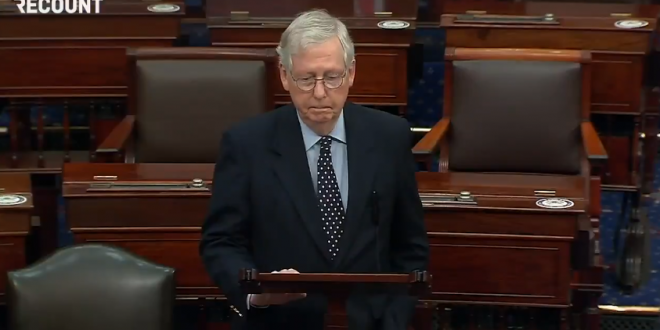 The Kentucky Republican said the House’s proposal is too generous for higher earners and “does not align with what President [Donald] Trump has suggested, which has no realistic path to quickly pass the Senate.”

McConnell said he will not split up a bill combining the checks with an election fraud commission and a rollback of legal protections for big tech, which he introduced on Tuesday.

“Let me just make it clear for the majority leader — that 10 out of the poorest 25 counties in the US are located in Kentucky.” pic.twitter.com/EPm7jT5TSF

Mitch McConnell & the rest of the hideous GOP saying they won’t be bullied into handing out an additional $1400 because some people might not need it, are the same folks who gave out billions in tax breaks to the rich TO STIMULATE THE ECONOMY.
WE. ARE. NOT. STUPID. YOU FUCKERS!

80-12: Senate votes to begin debate on the override of the President’s veto of the 2021 NDAA defense policy bill. McConnell then filed cloture setting up a procedural vote to limit debate for later in the week and adjourned the Senate until tomorrow at 12 Noon. pic.twitter.com/XCRFj6VPYD