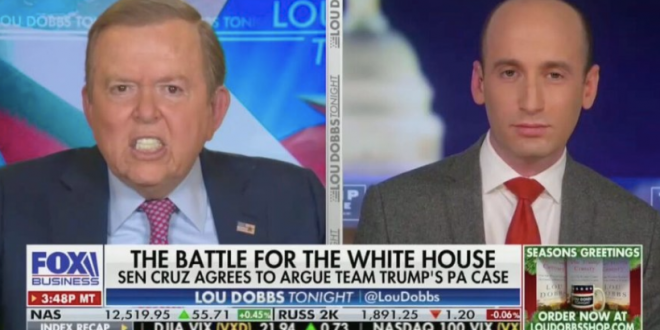 Lou Dobbs Rages At Voldemort: Why Won’t You Salute Ted Cruz And Welcome Him To The WH Legal Team?

“The reality is that this president right now is fighting — and let’s be straightforward about it — he’s fighting all alone,” Dobbs continued. “And Ted Cruz has stepped up to say he’ll argue before the Supreme Court. Why on God’s green Earth wouldn’t the White House jump on it?” Miller pivoted to talking about state legislatures, but Dobbs actually interjected and snapped at Miller.

“No, no, Stephen. I’m not going to let you do this! I’m not going to let you do that I asked a question. We’re reasonably smart and decent fellows. Why don’t you answer me? Why don’t you guys jump and salute Ted Cruz and say, yes, we want you on the team now? My God, this is not a time for internecine nonsense on the part of the Republican Party which is watching its blood drain into the streets because they’re gutless!”