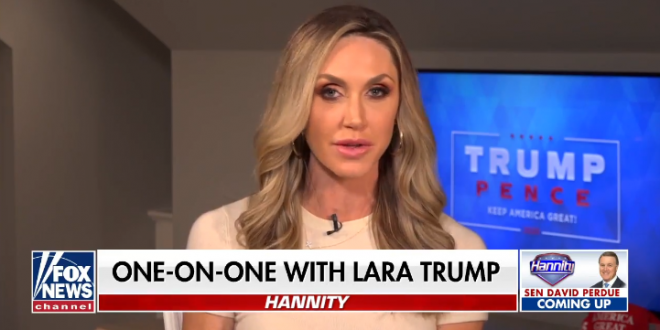 Lara Trump: “Don’t For A Second Think That Joe Biden Is Going To Be Sworn In On January 20th” [VIDEO]

Lara Trump continued to cling to false hope and push conspiracy theories to claim on Fox News’ Hannity that President-elect Joe Biden won’t be sworn in to replace he father-in-law in the White House on January 20th.

“The fact that we are here in December and we’re having to point these things out is mind-boggling,” Trump said. Citing other baseless “egregious voter fraud” claims and “the crazy video,” she then spun out an absurd conclusion that “Donald Trump overwhelmingly wins the state of Georgia.”

“Look, we’re fighting to the end and I want to make it clear to the American people, this is not over,” Trump insisted, unabashedly misleading Hannity’s viewers. “Don’t for a second think that Joe Biden is going to be sworn in on January 20th.”