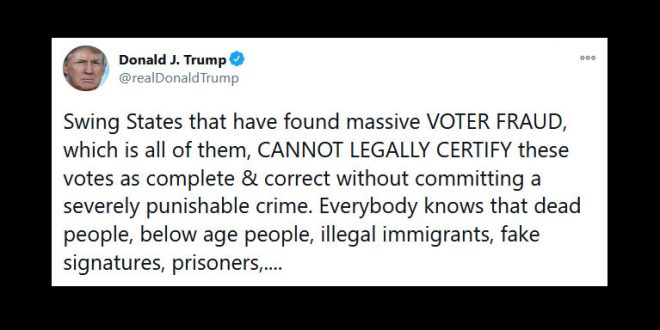 The Electoral College is scheduled to cast their votes Monday, in state-by-state meetings across the country, and President Donald Trump is very unhappy about it, tweeting renewed attacks on the election he lost to President-elect Joe Biden, but this time with a new twist: declaring that certifying the votes will be “committing a severely punishable crime.”

It’s one of multiple misrepresentations, misstatements, and just flat-out lies he fits into a three-tweet thread. Unsurprisingly, Twitter quickly labeled all of these tweets with “This claim about election fraud is disputed.” Unfortunately for Trump, tweeted complaints have absolutely no legal effect.

Swing States that have found massive VOTER FRAUD, which is all of them, CANNOT LEGALLY CERTIFY these votes as complete & correct without committing a severely punishable crime. Everybody knows that dead people, below age people, illegal immigrants, fake signatures, prisoners,….

….place in Detroit, Philadelphia, Milwaukee, Atlanta, Pittsburgh, and elsewhere. In all Swing State cases, there are far more votes than are necessary to win the State, and the Election itself. Therefore, VOTES CANNOT BE CERTIFIED. THIS ELECTION IS UNDER PROTEST!