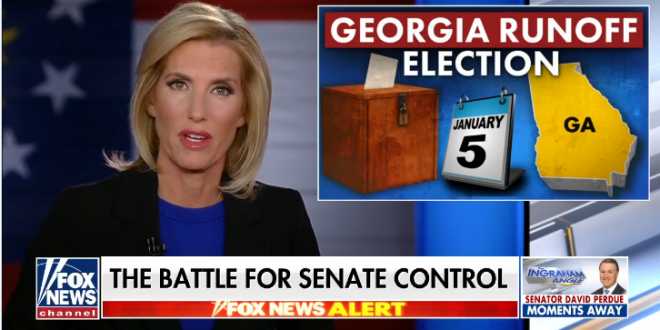 Fox News primetime anchor Laura Ingraham expressed shock at calls from some of President Donald Trump’s legal surrogates to boycott the upcoming Georgia special election and angrily dismissed — though not by name — those behind them as “stupid” during an interview with Georgia Senator David Perdue.

“Do the suburbanites need a reunited Republican party or do they need to people running around saying ‘Oh don’t vote and January 5th because that would be perpetuating a corrupt process?’” Ingraham asked, the sarcasm evidence in her voice. “When I heard that the other day I almost fell out of my chair.”

Rather obviously, Ingraham was referring to Sidney Powell and Lin Wood. How interesting that she wouldn’t name them.

“Now, some severely misguided lawyers are actually urging Republicans… not to vote in the runoff, presumably because to do so would dignify what they believe to be a corrupt system.” pic.twitter.com/bX8kw8BAuZ