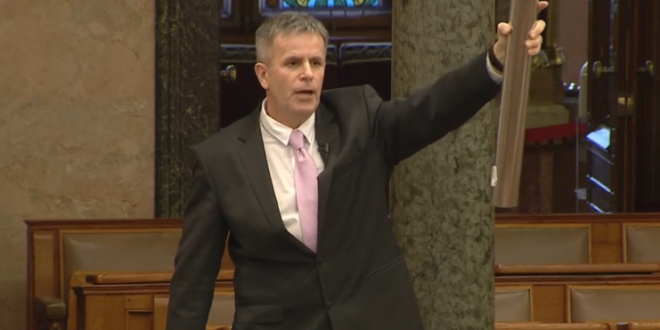 Hungarian Pol Mocks Disgraced Anti-LGBT Homocon With Drainpipe: So Much For Your “Christian Morality”

A Hungarian lawmaker has mocked former Fidesz MEP József Szájer by holding up a drainpipe in Parliament. József Szájer resigned last week after he was caught by police fleeing a gay sex party in Brussels he had been attending, despite coronavirus lockdown restrictions.

Drainpipes have become the centre of internet jokes and memes in Hungary while the guttering at the apartment in Brussels has also been decorated with a makeshift plaque to commemorate the 30-year “political career of József Szájer”.

Read the full article. Szájer, who wrote Hungary’s ban on same-sex marriage, reportedly bloodied his hands while clambering down the drainpipe before pleading for diplomatic immunity. According to the European press, members of his party knew of his sexuality despite his 37-year marriage to a female right wing judge who currently sits on Hungary’s Constitutional Court.

Previous Michele Bachmann: “Satan Stole My Vote!” [VIDEO]
Next GOP Rep Intros Resolution To Condemn Any Member Of Congress Who Calls On Glorious Leader To Concede