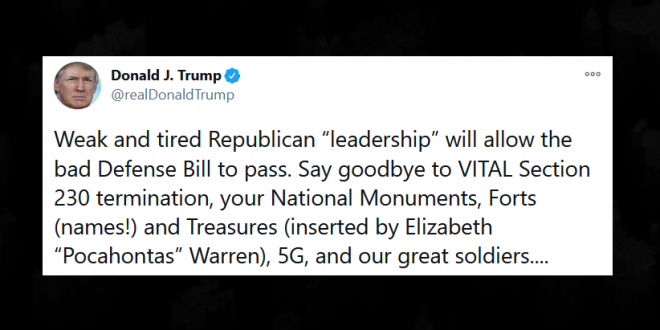 President Trump on Tuesday sharply criticized Republican leaders for allowing a vote to override his veto of a must-pass defense policy bill, calling them “weak” and “tired” and accusing them of a “disgraceful act of cowardice.”

The House on Monday evening voted 322-87 to override Trump’s veto of the National Defense Authorization Act (NDAA), teeing up what may be the first and only veto override of Trump’s presidency.

Trump’s vitriol comes amid existing tensions between the president and Republicans who have acknowledged Joe Biden as the president-elect and objected to Trump’s efforts to overturn the election results.

….being removed and brought home from foreign lands who do NOTHING for us. A disgraceful act of cowardice and total submission by weak people to Big Tech. Negotiate a better Bill, or get better leaders, NOW! Senate should not approve NDAA until fixed!!!