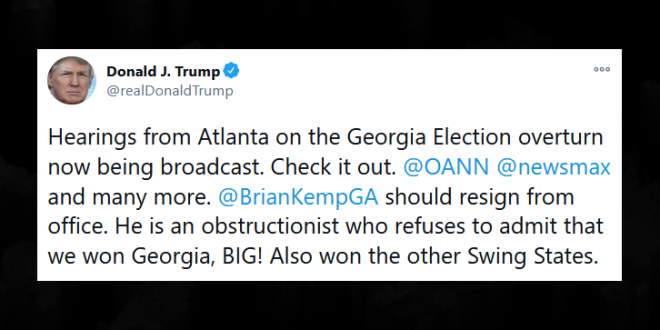 In a tweet sent from the president’s personal account on Wednesday, President Donald Trump asked Georgia Gov. Brian Kemp to resign from his post over the president’s disagreement with the handling of the Nov. 3 election in Georgia. The president’s claims that he won the election have been proven false.

The Georgia governor, along with the state’s election leader, Secretary of State Brad Raffensperger, have been a focus of anger vocalized by the president since he lost the state to President-elect Joe Bidenby just over 12,000 votes. The results were certified after recounts and an audit.

Hearings from Atlanta on the Georgia Election overturn now being broadcast. Check it out. @OANN @newsmax and many more. @BrianKempGA should resign from office. He is an obstructionist who refuses to admit that we won Georgia, BIG! Also won the other Swing States.