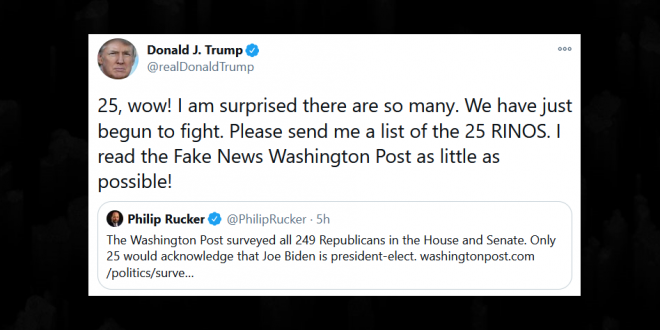 President Trump on Saturday demanded to know who the congressional Republicans were that acknowledged President-elect Joe Biden as the winner of the presidential election.

The president continues to promote claims, without evidence, that the election was rampant with voter fraud. However, Trump is growing isolated in his claims, and he has targeted Republicans that break from him.

For example, he lashed out at Georgia Gov. Brian Kemp (R) after he certified the state’s election results. And Ohio Gov. Mike DeWine (R) was among the first Republicans to call Biden “president-elect,” prompting Trump to urge a primary challenge to the governor in 2022.

25, wow! I am surprised there are so many. We have just begun to fight. Please send me a list of the 25 RINOS. I read the Fake News Washington Post as little as possible! https://t.co/cEBM0bYuQ9