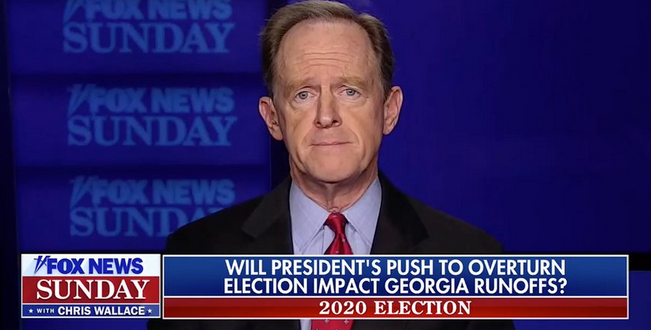 GOP Senator: Trump Will Be Remembered For “Chaos And Misery, Erratic Behavior” If He Vetoes COVID Bill

“You don’t get everything you want, even if you’re president of the United States,” GOP Sen. Pat Toomey said on “Fox News Sunday.” “I think the COVID relief measures are really, really important.” “In my state, as in many other states, we have governors who are closing down businesses again,” he added.

Toomey called it a “hopeful sign” that Trump has not yet vetoed the bill passed by Congress even as he has demanded larger direct payments of $2,000 to Americans. Toomey suggested that the president was thinking of his legacy with the demand, but said “he’ll be remembered for chaos and misery and erratic behavior if he allows this to expire.”

Toomey, not incidentally, has said he will not run for reelection in 2022.