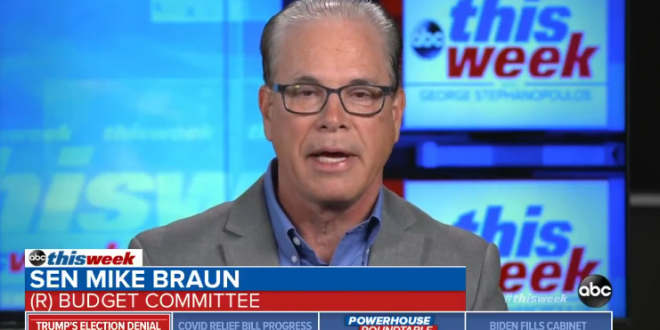 The legal process concerning election results must be allowed to play out, Sen. Mike Braun, R-Ind., said Sunday on ABC’s “This Week,” but nearly 50 court cases brought by the Trump campaign have been thrown out due to lack of evidence.

Braun has been an ardent defender of President Donald Trump and has followed his lead in questioning the results of the election and its integrity, calling for all “improprieties” to be investigated.

“I think that we’ve got a threshold coming on December 14th when the electoral college meets. I think when you talk — reflexively dismiss that nothing has happened at all, versus the other side of the spectrum, fraud, widespread and it’s a wide gulf.”

As you’ll see in the clip, Braun trots out the debunked “suitcases” claim only to be immediately shot down by Stephanopoulos.

.@GStephanopoulos to GOP Sen. Mike Braun: There have been 38 lawsuits by President Trump and his allies that “have been dismissed by judges…the attorney general came back and said there’s no evidence of widespread fraud…why can’t you accept the results?” https://t.co/UjoxQv2yAb pic.twitter.com/QzklD5z5Y9