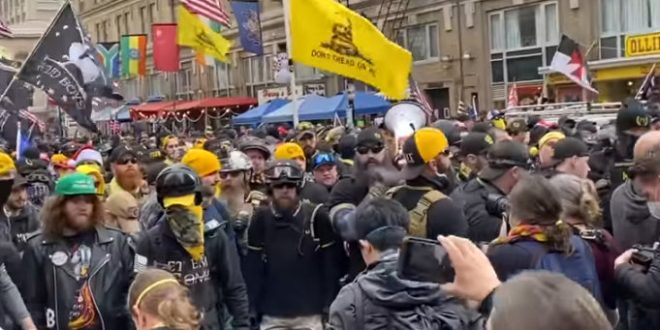 At least four people were stabbed Saturday night amid post-election protests in Washington, according to the DC Metropolitan Police Department’s public affairs office.

DC Fire and EMS transported eight people from the protest area since around 7 p.m.: the four stabbing victims, who were said to be in critical condition, according to DC Mayor Muriel Bowser’s office; two police officers with non-life-threatening injuries and two people with minor injuries.

At least 23 people have been arrested during the “Stop the Steal” protests, the mayor’s office said. Six people were arrested for assault on police officers.

Trump told the Proud Boys to “Stand back and stand by” and they listened to their Chosen One.

This is all on you, Republicans. You have enabled all of this.

“We wanted to show how manly we were, so we wrote on each other’s asses with a Sharpie.” https://t.co/gHTegnshuE

How it started. How it’s going. pic.twitter.com/afGdu6FZYN

I’m out of downtown after a wild night. Read our dispatch on the day of demonstrations and the multiple stabbings that followed 👇🏽 https://t.co/Vyp4EBG0nx