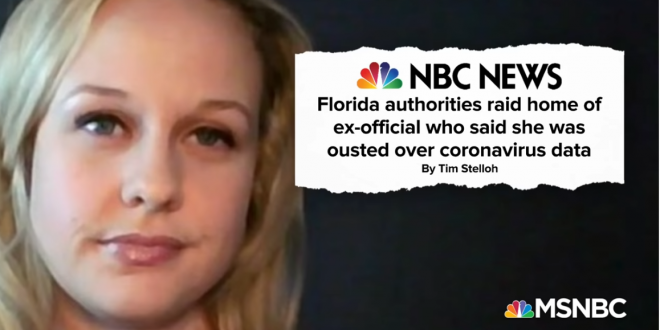 The state law used to justify a police raid at the home of a COVID-19 whistleblower suspected of accessing a Florida emergency messaging system without permission carries a stiff penalty: Up to five years in prison.

That means Rebekah Jones, the Florida Department of Health data scientist fired in May for alleged insubordination, may be in significant legal peril should prosecutors decide to press third-degree felony charges.

The state’s probe involves an unauthorized message that was sent to about 1,750 people on Nov. 10 through an emergency-alert system. The message read, “It’s time to speak up before another 17,000 people are dead. You know this is wrong. You don’t have to be a part of this. Be a hero. Speak out before it’s too late.”

GOP appointee Ron Filipkowski resigned from his position in Florida after the raid on Rebekah Jones’ home.

“I watched the video when she tweeted it out right after the incident… I just couldn’t believe what I was seeing… I was just really outraged by the whole situation.” pic.twitter.com/B7EQikm849

The judge who signed the search order of my house was appointed by Governor Desantis and sworn in less than a month before he signed that warrant. In civil court. He’s not even a criminal court judge. It was one of his first actions as judge.