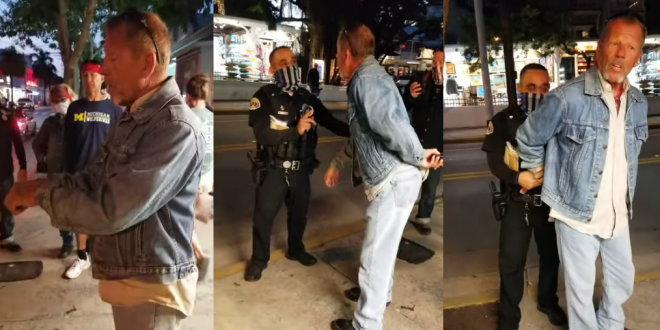 East Like Fire Rescue Commissioner James Dalrymple was arrested in downtown Key West and charged with obstruction of justice after an incident that unfolded after he refused to wear a mask as required by city ordinance. According to a Key West Police report, officer Leonardo Hernandez saw a group walking south on Duval Street around 6:40 p.m. A few in the group were not wearing masks.

After the officer asked them to put on masks, which the city requires while outside of residences, Dalrymple, 64, responded that “the governor’s order says we do not have to,” according to the incident report. On Sept. 25, Gov. Ron DeSantis lifted coronavirus-related restrictions on business capacity and operations, but his order did not repeal local mandates that require masks.

“Officers can’t take people to jail just for not wearing a mask,” Key West police spokeswoman Alyson Crean told Keys Weekly. “The officer warns them, then offers them a mask, and if they still refuse to wear one, they’re cited. When people refuse to sign or accept the citation, or when the situation escalates somehow, that’s when a person is arrested.”

Dalrymple, 64, is seen in a friend’s YouTube video being arrested for obstruction of justice. A Key West police officer is heard telling the man that he had refused to wear a mask.

When Dalrymple said he didn’t have a mask, the officer says he offered him a mask and Dalrymple refused to wear it. The officer then says that Dalrymple was under arrest for obstruction of justice by refusing to identify himself to a law enforcement officer.

At 0:13 in the clip below Dalrymple tells the officer, “I don’t have an ID.” At 0:38 the officer tells him to turn around and put his hands behind his back. Moments later you can see Dalrymple slip his wallet into his wife’s hand (see center screenshot above) without the officer seeing him do it. The comments on YouTube are not on his side.