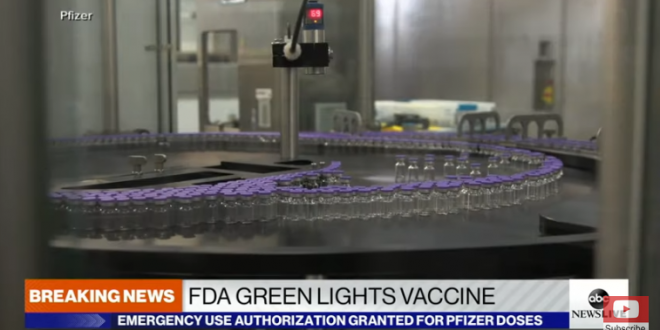 The Food and Drug Administration has approved Pfizer and BioNTech’s coronavirus vaccine for emergency use, a monumental turning point in the once-in-a-century pandemic that has taken nearly 300,000 American lives in less than a year and wreaked havoc on the U.S. economy.

FDA Chief Scientist Denise Hinton told Pfizer in a letter Friday that she was authorizing the emergency use of the company’s vaccine. President Donald Trump called it a “medical miracle” in a video tweet. “We’ve delivered a safe and effective vaccine in just 9 months,” Trump said. “This is one of the greatest scientific accomplishments in history.”

Previous CHATTER AWAY: Overnight Open Thread
Next Trump Rages: “The Supreme Court Really Let Us Down”