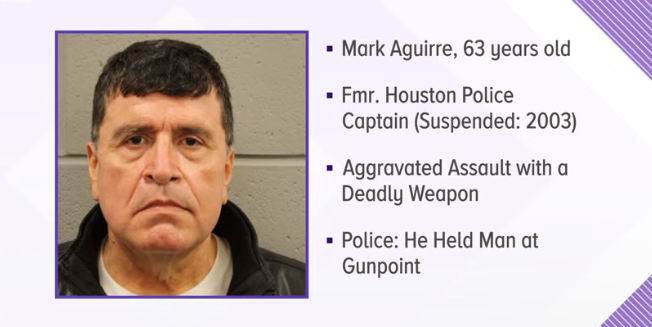 A former Houston Police Department Captain was arrested and charged for running a man off the road and pointing a gun at his head in an attempt to prove claims of a massive voter fraud scheme in Harris County.

Mark Anthony Aguirre [photo], 63, was arrested by Houston police Tuesday and charged with aggravated assault with a deadly weapon, a second-degree felony punishable by up to 20 years in prison.

Aguirre told police that he was part of a group of private citizens called the “Liberty Center,” who were conducting a civilian investigation into the alleged ballot scheme.

Police say Aguirre was paid $266,400 by Houston-based Liberty Center for God and Country, a nonprofit organization that is run by GOP party activist Dr. Steven Hotze. A conservative power broker, Hotze unsuccessfully sued to stop the extension of early voting in Texas for this year’s election.

He also sued officials in Harris County, where Houston is located, to limit in-person and absentee voting, making allegations without evidence that Democrats were engaged in “ballot harvesting” by gathering votes from individuals who are homeless or elderly.

It was Hotze who bankrolled the successful campaign to repeal Houston’s “wicked, evil, Satanic” LGBT rights ordinance, during which he compared gays to rapists and murderers.

According to Hotze, same-sex marriage will result in children “practicing sodomy” in kindergarten.

Last year he appeared here when he “prophesied” that God will deliver “just retribution” to lawmakers who vote for LGBT rights.

When he’s not calling on God to kill politicians or the governor to kill protesters, Hotze sells “miracle” supplements because high cholesterol doesn’t really cause heart disease.

A former Houston police captain allegedly held an innocent man at gunpoint as part of an amateur voter fraud investigation, convinced his was part of a ballot crime ring that involved Hispanic children and
$10 million from Mark Zuckerberg. https://t.co/AQDbsxRCKG

Imagine this guy coming at you with a gun and asking whether Mark Zuckerberg paid you to manufacture mail-in ballots. pic.twitter.com/j0anB3Rvlh