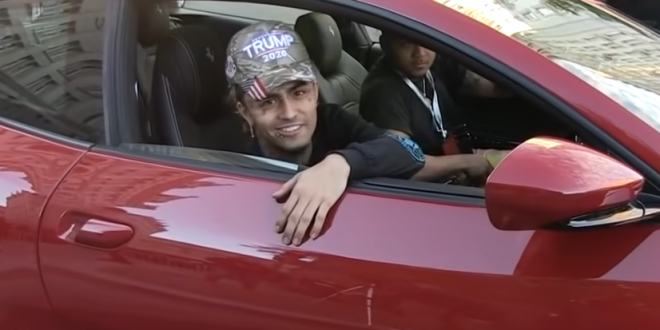 Lil Pump is no longer welcome to fly JetBlue Airways after violating COVID-19 safety protocols. The 20-year-old rapper, whose real name is Gazzy Garcia, is banned from flying on JetBlue after refusing to wear a face mask during his Sunday flight, JetBlue confirmed to USA TODAY.

On his flight from Fort Lauderdale to Los Angeles, the “Gucci Gang” singer “became verbally abusive with crew members after being asked multiple times and refusing to comply with JetBlue’s face covering policy,” which resulted in law enforcement involvement.

In early November, Trump welcomed Lil Pump to the stage at a rally in Michigan, mistakenly introducing him as “Little Pimp.” It was later revealed that Lil Pimp not only did not vote for Trump, he has never been registered to vote. Over the weekend a video posted to TikTok showed Lil Pump declaring COVID to be a hoax.

Trump-supporting hip-hopper Lil Pump is apparently claiming COVID is a hoax, at least according to a third-party tweet of him denying its existence.

Previous Proud Boys DC Hotel Hangout To Close During Protest
Next Trump: “Our GOP Leaders Are Pathetic But I Am Not”