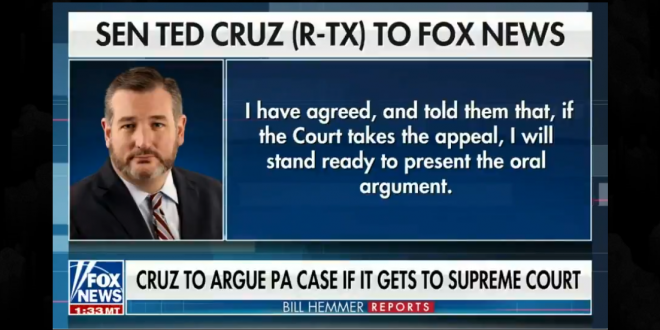 Because of the importance of the legal issues presented, I’ve publicly urged the US Supreme Court to hear the case brought by Congressman Mike Kelly, congressional candidate Sean Parnell and state legislature candidate Wanda Logan challenging the constitutionality of the presidential election results in Pennsylvania.

The petitioners’ legal team has asked me whether I would be willing to argue the case before Supreme Court if the Court grants certiorari. I have agreed, and told them that, if the Court takes the appeal, I will stand ready to present the oral argument.

As I said last week, the bitter division and acrimony we see across the Nation needs resolution. I believe Supreme Court has a responsibility to the American People to ensure, within its powers, that we are following the law and following the Constitution.

If #SCOTUS grants cert in the PA election case, I have told the petitioners I will stand ready to present the oral argument.