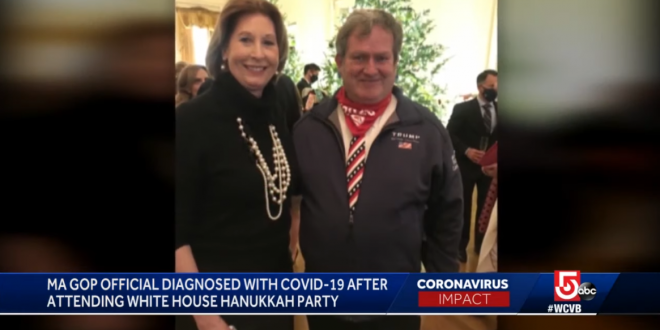 Earlier this month, Tom Mountain, a Massachusetts Republican Party leader, posed for a maskless photo in front of a silver menorah as dozens of other guests without face coverings mingled nearby at a White House Hanukkah party.

Three days later, the vice chairman of the Massachusetts Republican State Committee was rushed to the hospital with a severe case of covid-19 that later left him close to needing a ventilator. Now, as Mountain recovers at home in Newton, Mass., he says he likely contracted the virus at the White House event.

“Lets put it this way: When I went down to Washington, D.C., for the White House Hanukkah event, I was perfectly fine,” Mountain, 60, told WJAR. “And three days later after that event, I was in the hospital … ready to be put on a lifesaving ventilator.”

Tom Mountain admits he was not a fan of wearing a mask, even months into the pandemic. “I was one of the naysayers,” he said. “I am no longer a naysayer.”

Mountain shared photos with NBC 10 News from a Hanukkah party held at the White House on Dec. 9, which showed some attendees – including Mountain – not wearing a mask. “My family tried to dissuade me,” he said. “I didn’t listen.”

Mountain said he attended the holiday gathering to represent the Massachusetts Republican Jewish Committee, of which he’s also vice chair. “I was really politically and morally obligated to go,” Mountain said.