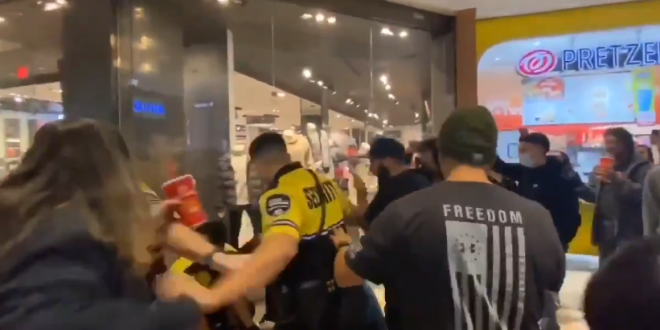 San Antonio Police arrested one person, Eric Matthew Braden, in connection to an unauthorized protest at North Star Mall over wearing masks to mitigate the spread of COVID-19. Police say they responded to the mall around 7 p.m. on Dec. 22 for a criminal trespassing call. Mall security confronted an organized protest with people refusing to wear masks.

Investigators said the group was given a criminal trespass warning and asked to leave the property. But SAPD said Braden continued to escalate the situation.

In a statement, North Star Mall said that as they addressed “a disorderly crowd of mask-less protestors, one individual became physical and attempted to shove a security officer.” Braden is out of jail on bond as of Tuesday afternoon, facing a criminal trespassing charge.

Only at Northstar San Antonio Tx
Anti maskers vs Secruity
A group of anti maskers roaming the mall and getting kicked out. People chanting the national anthem and going wild. Stupidity and corona in the air. DAFUQ? pic.twitter.com/ppXbAtfSO2