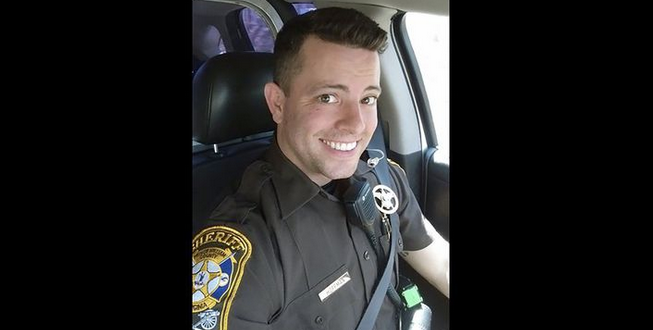 A Virginia sheriff’s deputy who allegedly called for a “violent revolutionary action” and said he was “ready to kill” anyone who tried to vaccinate his children or make him wear a mask has been fired.

He also allegedly instructed his followers to find the homes of their local public officials and representatives and “remove them from their sanctuary.”

The deputy, Aaron Hoffman, said in an interview with The Washington Post that he did not post those comments, saying the account he had recently opened on Parler, a social media website that has become a favorite among conservatives, was hacked.

“I did not make those posts,” Hoffman said. “I’m trying to figure out who did.” The announcement of the investigation and firing came shortly after a string of tweets on Friday showing screenshots of comments allegedly made by Hoffman on Parler.

He disavowed the hateful messages attributed to him and said he plans to consult with attorneys about his firing and the social media account.

i hope you all will join me in wishing a merry christmas to the prince william county sheriff’s office’s “human interaction specialist,” deputy aaron hoffman. or, as he’s known on parler, “wethepeoplewarrior.” pic.twitter.com/HlwtwiUhd0

over on parler, deputy hoffman caught the attention of people monitoring proud boy jeremy bertino in the aftermath of the last violent proud boy gathering in DC. deputy hoffman is prepared to refuse orders when the time comes to fight alongside the proud boys. pic.twitter.com/2uGsKrjOn1

deputy hoffman isn’t interested in marching in DC (& not JUST because he can’t take his gun) – he wants patriots to storm the homes of their local liberal judges & politicians to “remove them.” pic.twitter.com/IexIZGksuP

my advice would be that when you post pictures of your arsenal alongside threats to kill judges, keep your government-issue work vest that says SHERIFF on the front of it out of the picture, but what do i know. pic.twitter.com/vPYpILhJSL

aaron, please log off & spend christmas with your children instead of posting transphobic videos on a knockoff facebook for fascists! pic.twitter.com/PBKhJE0vuf

oh so now you’re shy about your plans to break into the homes of local judges & elected officials, deputy? pic.twitter.com/dwUs0C6HFi

well that was fast pic.twitter.com/Y2ByWugvGV