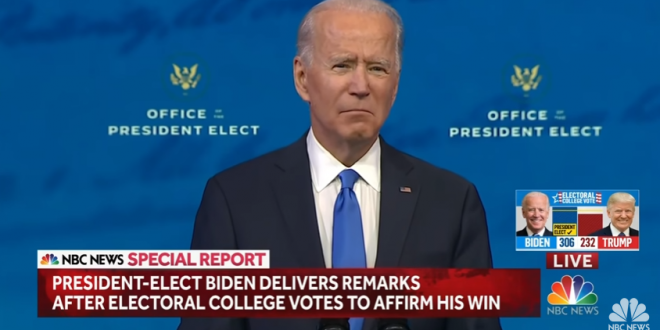 President-elect Joe Biden accused President Trump of an “unprecedented assault on democracy” in a speech Monday night hours after the Electoral College formalized his victory. Mr. Trump has refused to concede the election and has tried repeatedly to use the courts to challenge the results without success.

Mr. Biden, speaking in Wilmington, Delaware, ran through some of Mr. Trump’s legal challenges, and said “they were found to be without merit” every time. “Every single avenue was made available for President Trump to contest the results,” Mr. Biden said. “He took full advantage of each and every one of those avenues.”

Biden denounced the attacks on voting by President Trump and his allies, calling them “unconscionable” and saying that no officials should ever face the kind of pressure they received to falsely proclaim an election to be fraudulent.

“They saw it with their own eyes,” Mr. Biden said, speaking in Wilmington, Del. “And they wouldn’t be bullied into saying anything different.”

“We the people voted,” he said. “Faith in our institutions held. The integrity of our elections remains intact. And so now it is time to turn the page, as we’ve done throughout our history. To unite. To heal.”