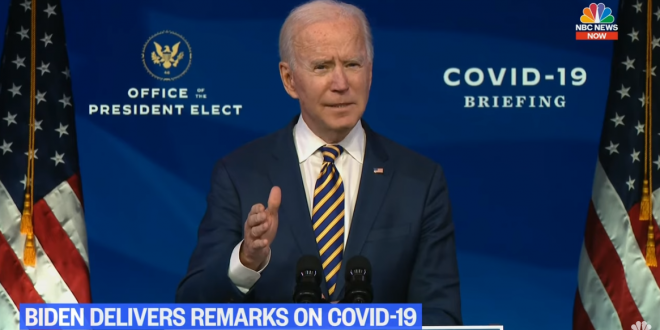 President-elect Joe Biden sharply criticized the Trump administration over its Covid-19 vaccination deployment, saying it is too slow and promising a more robust effort once he takes office.

“As I long feared and warned, the effort to distribute the vaccine is not going … as it could go,” the incoming chief executive said of the vaccine distribution effort being led by the outgoing one, Donald Trump, who has mostly left the last stages of getting the drugs into arms in the hands of state and local officials.

Mr Biden said he has “instructed my team to prepare a much more aggressive effort” intended to “boost the pace of vaccinations.” But it won’t happen as soon as he is sworn in on 20 January, he warned.

Biden criticized the Trump administration Tuesday for the pace of distributing COVID-19 vaccines, saying it is “falling far behind.” Biden said “it’s gonna take years, not months, to vaccinate the American people” at the current pace.

He vowed to ramp up the current speed of vaccinations five to six times to 1 million shots a day, but acknowledged it “will still take months to have the majority of Americans vaccinated.”

The president-elect, who takes office Jan. 20, said he has directed his team to prepare a “much more aggressive effort to get things back on track.”