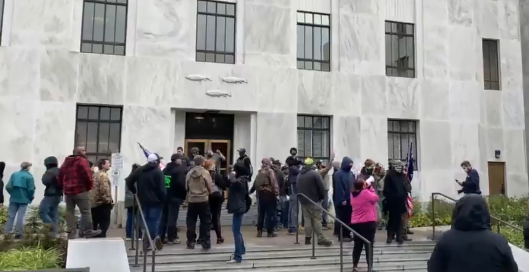 The Oregon State Police declared an unlawful assembly as a growing number of protesters pushed their way through the Capitol doors chanting, “let us in” and “arrest Kate Brown.”

Police officers donned gas masks as they squared off with protesters, some of whom carried firearms and bear spray, and many of whom were not wearing masks.

Among the protesters were members of Patriot Prayer, a far-right group based in Vancouver, Washington, that that attracts white supremacists and has engaged in violence.

“I’m here to support the constitutional rights of people and of Oregon business [owners.] These people are unemployed and their lives are being ruined by this situation and most importantly by a government that seems to have taken totalitarian views,” one protester who would identify himself only by his first name, Duane, told The Daily Beast.

A group of about 300 heavily armed radical right demonstrators attempted to force their way into two separate entrances of the Oregon State Capitol, outraged lawmakers were holding a special session closed to the public. https://t.co/I1TkA7kIs0

Protestors are gathered around a side entrance pic.twitter.com/3DO6t8prZG