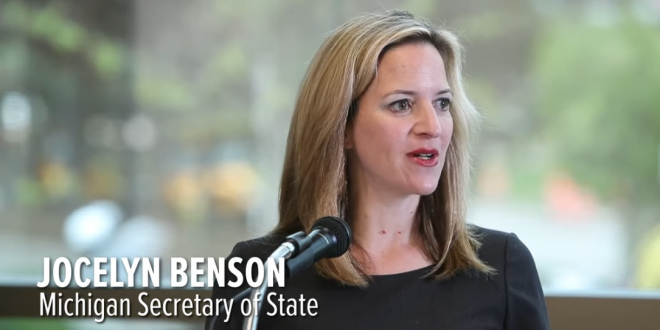 Armed Cultists March On Home Of MI Sec Of State

Michigan Secretary of State Jocelyn Benson had just finished wrapping string lights around her home’s portico on Saturday evening and was about to watch “How the Grinch Stole Christmas” with her 4-year-old son when a crowd of protesters marched up carrying American flags and guns.

About two dozen protesters chanted “Stop the Steal” and accused Benson, a Democrat and Michigan’s chief election officer, of ignoring widespread voter fraud — an echo of President Trump’s continued unfounded claims as he seeks to overturn the results of the election that President-elect Joe Biden won.

Although the group dispersed with no arrests when police responded just before 10 p.m. Saturday, Michigan state officials accused the group of “terrorizing” Benson’s family.

The video below was live-streamed by the cultists.

The individuals gathered outside my home targeted me as Michigan’s Chief Election officer. But their threats were actually aimed at the 5.5million Michigan citizens who voted in this fall’s election, seeking to overturn their will. They will not succeed in doing so. My statement: pic.twitter.com/RSUnPSN4Aa