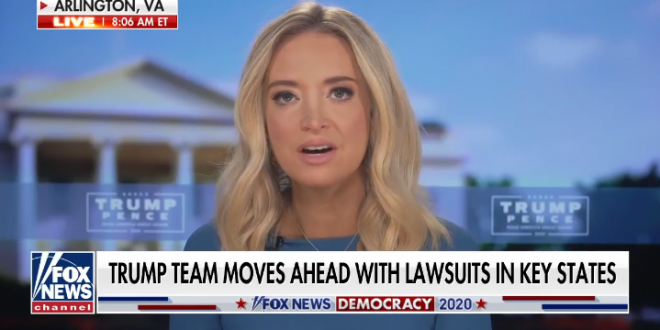 White House press secretary Kayleigh McEnany on Thursday referred questions back to the White House during a Fox News interview where she appeared as a campaign adviser.

McEnany, who has taken on an increased role as a campaign surrogate in recent weeks, would not answer a question about whether President Trump has considered allowing President-elect Joe Biden to receive a daily intelligence briefing. “I haven’t spoken to the president about that,” she said on “Fox & Friends.”

“That would be a question more for the White House, but I will say that all laws are being followed with regard to an expected transition, though we expect to continue on as the Trump administration. We will see how our litigation goes.”

WAIT. When asked about whether Joe Biden will receive access to intelligence briefings, Kayleigh McEnany says, “That would be a question more for the White House.”

Kayleigh McEnany IS the WH Press Secretary, though she is appearing on FOX as a Trump 2020 adviser. pic.twitter.com/34gfs72fzE

It’s getting lost in larger outrages, but @PressSec behavior is both outrageous and damaging. You can not be both a paid government employee and a spokesperson for the White House. It’s against the law. You can’t refer q’s to yourself wearing a different hat. Prosecute this. https://t.co/E9AaP6665z