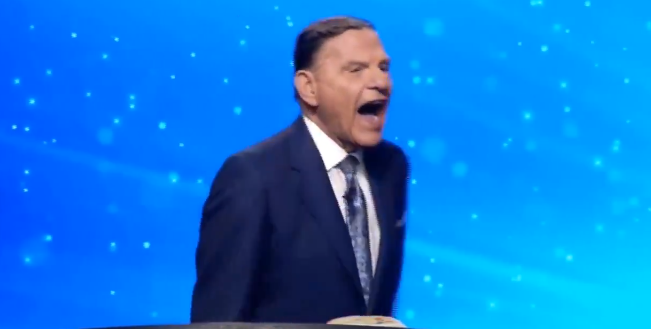 Televangelist Kenneth Copeland got a standing ovation for laughing at math. It wasn’t a natural laugh, a spontaneous guffaw. It was more as if he were repeating the word “hah hah hah” over and over and over again, as if he had to force it from his diaphragm.

“The media said Joe Biden’s Pre – HAH-HAH-HAH-HAH…” he said to supporters. “The media said what?” He then stalked around the podium, mouth wide open enough to catch the fly that landed on Mike Pence’s head.

“Hah-hah-hah-hah-hah,” he bleated, not letting up until his audience stood, echoing his cry, which he ended with a whoop. The 41-second video clip, posted on Twitter by Right Wing Watch, showed Copeland before an unmasked audience, all equally mimicking his fake mirth.

Over 9 million views at this writing.

Televangelist Kenneth Copeland laughs at the media for declaring that Joe Biden has won the election and will become president. pic.twitter.com/ARHqmsEbo7

christ this is something straight out of a monty python skit

For a group of people transfixed on demons and the antichrist, they sure have a hard time spotting what’s right in front of them

Someone needs to mash that up with Paula White’s hamanda achta bacta sanda chant.

God has spoken and he sais stuff like this doesn’t work. pic.twitter.com/trERQf1FzR

All the way to the bank https://t.co/NyQg4NngKv