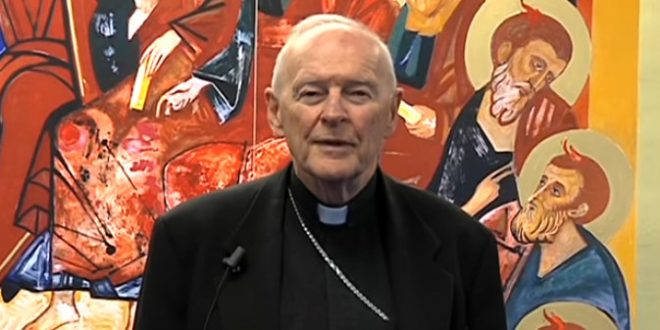 Vatican: We Knew About Accusations Against Cardinal

In an explosive report that calls into question the decision-making of three Catholic popes, the Vatican has revealed a series of institutional failures that led to the repeated promotion of now disgraced ex-cardinal Theodore McCarrick despite rumors of his alleged sexual misconduct with young men as early as the 1990s.

The Vatican places an abundance of responsibility on Pope John Paul II, who appointed McCarrick as archbishop of Washington in 2000 and made him a cardinal in 2001.

The report reveals that the late pontiff, now a Catholic saint, made those appointments despite being warned in 1999 by then-New York Cardinal John O’Connor that McCarrick had been the subject of anonymous allegations and was known to invite seminarians to sleep in the same bed as him.

Quite notably, viciously anti-LGBT Archbishop Carlo Maria Vigano is named by the Vatican as being part of the coverup. Vigano, you may recall, colluded with the Liberty Counsel to spring Kim Davis on Pope Francis during a visit to Washington DC. Pope Francis demoted him for the stunt.

Former Popes John Paul II and Benedict XVI knew of misconduct allegations against disgraced ex-cardinal McCarrick, one of the most prominent figures in the US Catholic Church before his fall from power, Vatican report finds. https://t.co/U2DxZU8uke

The Vatican received a high-level warning about sexual misconduct by Theodore McCarrick before Pope John Paul II named him archbishop of Washington, D.C., according to a long-awaited report published Tuesday https://t.co/uI70TL2Cum

*John Paul II appointed McCarrick to @WashArchdiocese in 2000 despite a cardinal’s warning;

*Archbishop Vigano didn’t investigate when told to in 2012.https://t.co/KybcyMEs6X